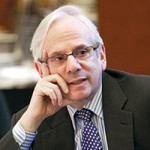 Gerald Rosenfeld is advisor to the CEO and vice chairman of Investment Banking at Lazard Ltd. He has been an investment banker for over 30 years at Salomon Brothers (1979-1988), Bankers Trust Company (1988-1992), Lazard Freres (1992-1998) and Rothschild (2000-2011), before rejoining Lazard in 2011. Prior to investment banking, Dr. Rosenfeld was a consultant at McKinsey & Co. (1976-1979.) In his investment banking career, Dr. Rosenfeld has worked primarily in the area of Mergers & Acquisitions and Corporate Restructuring, including representing General Motors, Chrysler, ITT Corporation, Tenneco, Lotus, TRW, Thermo-Electron, United Airlines, TWA, and US Airways, among many others. Prof. Rosenfeld has served on several public Boards of Directors and is currently a Director of CIT Group and of Continental Grain Co. He holds a Ph.D. from New York University (1973) in Applied Mathematics and is a fellow of the American Academy of Arts and Sciences. Prof. Rosenfeld is Clinical Professor of Business at NYU Stern and Distinguished Scholar in Residence at NYU School of Law. He serves on the Board of Overseers of Stern. He is co-Director of the Law School’s Jacobson Leadership Program in Law and Business.